The presented package and the below description largely relay on the study of Dubovik et al., [2006]. Spheroids (ellipsoids of revolution) is the simplest non-spherical shape, which is widely employed for modeling light scattering by non-spherical aerosol. Specifically, Mishchenko et al. [1997] showed that a mixture of randomly oriented spheroids with different sizes and axis ratios can reproduce the flattening of the phase function at side scattering angles for desert dust – perhaps the main scattering feature associated with the non-sphericity of aerosol particles. Of course, there is no physical reason to expect all dust particles to be perfect spheroids. However, modeling desert dust scattering for more complex and, arguably, more realistic geometrical shapes [e.g., Yang et al., 2000; Kalashnikova and Sokolik, 2002, 2004] require very long computation times and are not possible for the entire size range of desert dust aerosol. Therefore, the spheroid approximation remains appealing from an operational perspective. Moreover, the following considerations can be listed as further motivations for the utilization and exploration of spheroid models:
1. A spheroid is the simplest non-spherical shape that can generalize the spherical shape (a sphere is a spheroid with an axis ratio equal one). Accordingly, conventional spherical models of atmospheric aerosol can be easily generalized in terms of a model of randomly oriented spheroids with only one extra characteristic – the distribution of axis ratios (assuming, as the first-order approximation, that shape is independent of size).
2. The scattering of electromagnetic radiation by spheroids can be accurately simulated using the T-matrix method [Mishchenko and Travis, 1994]. The corresponding computer routine has calculation speed and range of applicability far superior to other available numerically exact routines.
3. The observations of scattering by real desert dust show a considerable degree of averaging of contributions from individual particles with different orientations, shapes, and compositions. Hence one can expect [Wiscombe and Mugnai, 1986; Bohren and Singham, 1991; Mishchenko et al., 1997] that specific shape details of a single particle may be insignificant after such an averaging and that scattering by an ensemble of particles can be approximated by that of a mixture of simplified particles (such as spheroids).
It should be mentioned here that the T-matrix code, however, has convergence problems in case of large sizes and aspect ratios. For instance, Nousiainen and Vermeulen [2003] and Nousiainen et al. [2006] did not consider particles with radii larger than 2.5 µm, Kahnert [2004] used 2.8 µm as the largest particle size, and Veihelmann et al. [2004] used a variable particle size cutoff as a function of aspect ratio (i.e., the greater the aspect ratio the smaller the cutoff size). To account for this shortcoming and achieve a reasonable computation time for remote sensing applications, Dubovik et al. [2002] proposed the use of kernel look-up tables for implementing quick and accurate simulations of spheroid optical characteristics. This kernel look-up tables include results of calculations using the T-Matrix code and the geometric-optics-integral-equation approach that is expected to provide accurate optical characteristics for spheroids with size parameter larger than 30 – 40. Thus, the available here software and kernels data base provide the kernel matrices for spheroids in a wide range of size parameters and enables rigorous incorporation of aerosol particles non-sphericity into aerosol remote sensing applications.
The limits of applicability of the spheroid model have been examined in several studies. For example, Nousiainen and Vermeulen [2003] and Veihelmann et al. [2004] analyzed the possibility of reproducing scattering matrices of mineral dust measured in the laboratory [Volten et al., 2001] by theoretical simulations using spheroids. Kahnert [2004] examined the feasibility of employing a spheroid model for reproducing the scattering matrices of desert dust represented by 110 different types of particles with low symmetry (4- and 5-hedral prisms with different aspect ratios). These studies have demonstrated that spheroids are far superior to spheres in reproducing the laboratory measurements.

Download of GRASP products is available via the current Products page. You can download the Spheroid package interactively via the website and the normal GRASP Single-Sign-On.
You have two options: 1) Clone button; 2) Download button (see screenshot below). 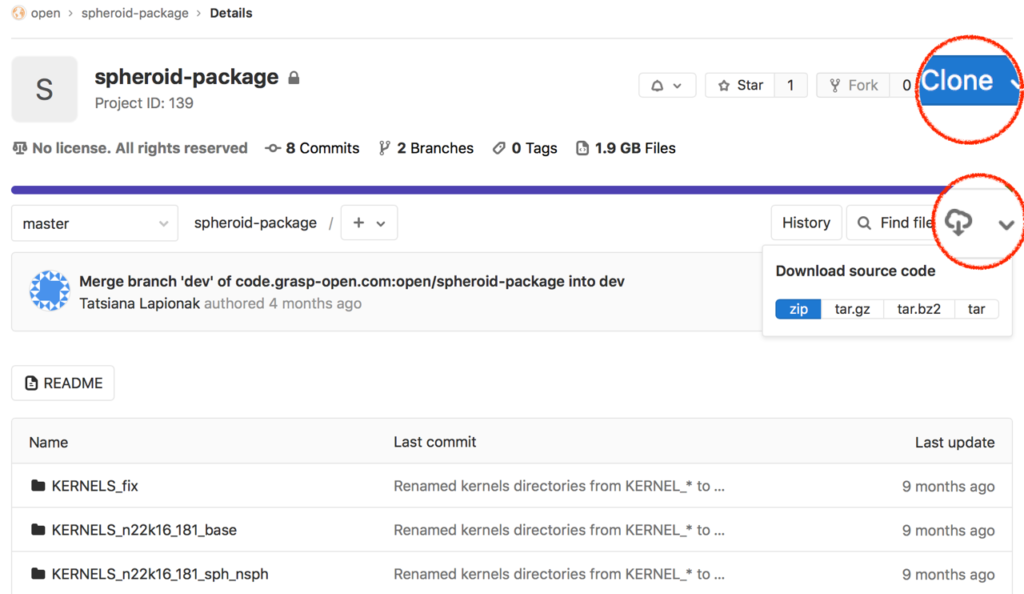 Note that the T-matrix code can have convergence problems in case of large particle sizes and aspect ratios.
This problem is avoided if the kernel look-up tables are used, because the geometric-optics-integral-equation approach is employed to provide accurate optical characteristics for spheroids with size parameter larger than 30–40.
The convergence problems can also appear in case of high refractive indices that are typical for mineral dust in thermal infrared spectral region.